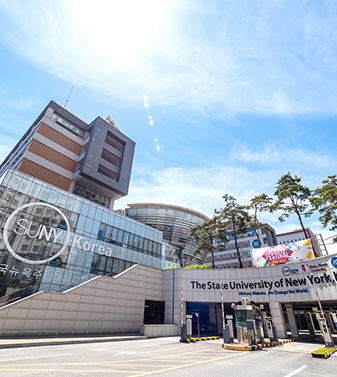 Getting the degree in Songdo and New York!

Our students have access to resources on two continents and opportunities to make friendships and future professional networks with an excitingly diverse student body from around the world. By 2020, there are or have been over 40 nationalities at SUNY Korea.

Undergraduate students have one year of study at Stony Brook University in New York. Our Ph.D. students also spend time in both South Korea and New York.

Four benefits of getting your degree at SUNY Korea can be summarized by four places: at SUNY Korea, you will be in the core of the economic, transport, and services area of South Korea that includes Incheon, Songdo, and Seoul.

Particularly convenient for international students, our undergraduate plan of study includes the opportunity to live conveniently near South Korea's main international airport, Incheon International Airport, ICN. ICN is merely 30 minutes from the SUNY Korea campus via a beautiful dedicated 8-lane bridge over the ocean that connects directly into the "smart green city" of Songdo. ICN is very efficient. It has been ranked for over a decade as either the first or the second best airport in the world. One of the main designers of this world class airport is on our faculty. Come to SUNY Korea to learn technical management from the best.
Songdo itself is becoming a global development and educational hub, and taking your education in Songdo is to gain a rare opportunity to live in a completely new 'green smart city,' built from scratch out of the ocean in the past 10 years. Songdo is already becoming a digital development 'cluster' as envisioned: it is now the home of hundreds of high rise buildings, many educational institutions, United Nations' and international NGO agencies' regional headquarters, global companies, and entrepreneurial spinoffs from academic work. All of this you can work with and interface with in Songdo.
Wider than Songdo, South Korea is a fast-paced economy and culture that is an international leader in digital development. South Korea has been in the OECD since 1996. The OECD countries (Organization for Economic Cooperation and Development) are the top-tier wealthiest and most productive industrial economies in the world.

South Korea provides much of our global infrastructure, its shipping industry, and many electronic products such as color TVs, laptops, and smartphones. It has expanded into the culture industries with the worldwide popularity of its "K-wave" music, television dramas, and digital games. This is aided by some of the highest penetrations of smartphone use in the world at over 90 percent of the population.

Plus, all of South Korea hosts blazing fast Internet speeds, rated as the world's fastest for a large country for over ten years running. South Korea also has a fast, safe, clean and very affordable system of public transportation (including electric bullet trains and inter-city subway lines) and public hospitals in a national health care system that are available at the same cheap rates for foreign nationals.
In Songdo, you have developed-world living standards. With nearby Seoul, you have a global city’s strong economy, urban nightlife, shopping, as well as traditional and fine dining. Conveniently, Songdo is connected to Seoul's excellent subway system, considered second best in the world after Hong Kong.

Seoul is the capital and largest city in South Korea. It is a huge metropolis of modern skyscrapers, cars, and pop culture meeting Buddhist temples, palaces, and street markets. The population of Seoul is 10 million (larger than New York City). The wider metro area of Seoul is over 25 million--about half the country's population.

In 2020, Seoul's metropolitan zone is the eighth largest metro area in the world. Seoul's metropolitan population is bigger than similar areas around New York City, Los Angeles and Beijing. For a developed country, Seoul is the most dense urban environment in the world--far denser than Japan's cities and certainly more dense than any cities in the United States. The population density of Seoul is almost twice that of New York City. However, Seoul is a jewel that remains remarkably functional and clean unlike other dense global cities.

Seoul rising to be a global city and world leader came out of the Korean economic boom from the 1960s to the present, called "The Miracle on the Han River". After the Korean War (1950-1953), Seoul transformed from a war-torn, destroyed capital city to being core to the country's global OECD status by 1996. Seoul is now the world's fourth largest metropolitan economy after Tokyo, New York City, and Los Angeles with an annual GDP of $895 billion US dollars (2018 statistics).

For perspective, living in Songdo is living in the Seoul metropolitan economy, and Seoul is larger economically than Paris, Chicago, Osaka, and London. Seoul's metropolitan economy is nearly twice the size of San Francisco, Washington DC, and Beijing. Major global manufacturers headquartered in Seoul include Samsung, LG, Hyundai, Kia, and SK.

In short, coming to South Korea is to live and breathe in a global high-tech culture of the future. The country is a fast-development success. It is a future that is the envy of many other developing countries, as what they dream of becoming. Many international students from developing countries are joining us here to see it firsthand. Therefore, joining SUNY Korea is to participate in that global future. It is to be ahead of others in that race for higher educational standards, technological skills, global connections, and a variety of modern and traditional cultural experiences. We hope you join us.